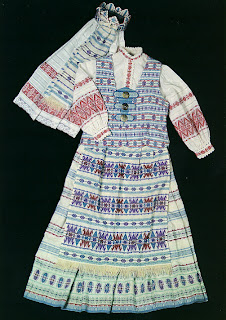 Traditional Lithuanian Wedding Dress....just a thought.
Posted by Rhya at 1:31 AM No comments: 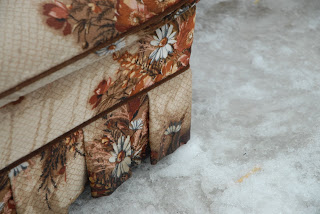 i went outside after sunday to try to find something with stems, with leaves, something to remind me that our feet would soon be able to run about with out socks. i found this couch, wedged in a snow bank. it was mostly the colour of the seventies, but the daisies were sweet.

kyle proposed to me the day before i went out and about, looking for life. the day before it was several degrees warmer, and the snow banks were slowly melting away, making our sidewalks into shallow rivers, running towards the roads. we were heading for dinner with friends. our feet were swallowed up in socks and boots, our steps heavy. it was awkward traveling through the water ways. we tripped on ice bergs, and had to hide from Arctic night monsters, you know the ones that live in a miniature state, until the sun sets, then they grow into giants...it was quite an ordeal getting to the corner of our street. And then we were safe in the humm of street light, and that's when kyle turned to me and proposed a proposal, a very seriously serious proposal! And I said a very certainly certain yes! It was a wondrously wonderful thing. After we held hands and did a dance in our winter boots, pounding puddles into disarray and sending the Arctic animals into a frenzy.
Posted by Rhya at 12:35 AM 1 comment:

Rhya
I love to create things. I have many dreams... and I like to make them real... with paper, scissors, glue, yarn and of course a whole load of imagination. I am a partner at the Monster Factory, where I make monsters.

Swimming Holes We Have Known, a beautiful collaboration all about swimming! Swim there now! 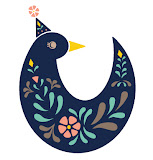